Posted on July 6, 2012 by historywithatwist 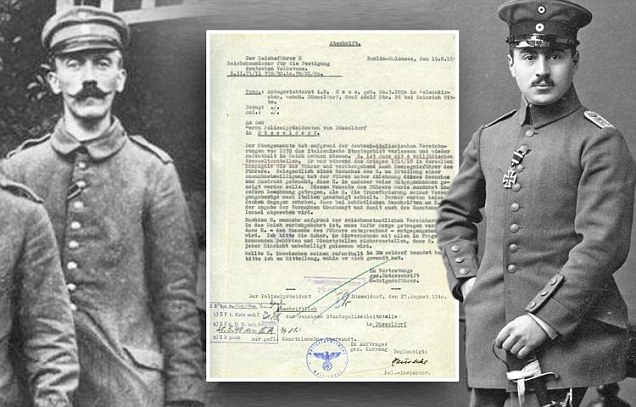 There’s no denying that Adolf Hitler was a spineless beast. He bullied and tormented his fellow citizens and ordered the murder of millions of others before taking the easy way out with a bullet to the brain as justice closed in on him. Now, an extraordinary letter has surfaced which highlights another side to the Nazi leader…one which is bound to raise a few perplexed eyebrows.

It would appear that when it came to the Jewish people, there was one that Hitler had a soft spot for – Ernst Hess, an officer in Hitler’s unit during World War I. Hess was baptised a Protestant, but his mother was Jewish; under Nazi race laws that made him ‘a full-blooded Jew’ and thus a candidate for liquidation.

He was spared the horror of the Nazi death camps by a personal intervention from ‘the Fuhrer’ himself. Hitler looked back with fondness of his time in the trenches and when Hess made a plea for clemency, his old war comrade relented.

The story, reported in The Daily Mail, was revealed by Hess’s daughter Ursula (86) when a newspaper discovered a letter, sent on the orders of Hitler, insisting that Hess be neither ‘persecuted or deported’.

The letter, signed by Reichsfuhrer of the SS Heinrich Himmler and dated August 27, 1940, states that Hess must be accorded ‘relief and protection as per the Fuhrer’s wishes.’ It further stated that Hess was ‘not to be inopportuned in any way whatsoever.’

Hess was a highly decorated officer, who was twice wounded – once in October, 1914 and again in October, 1916. In the summer of that year he had been temporarily assigned as Hitler’s company commander.

The former officer did well for himself after the war and rose to the position of judge, but with the advent of the Nuremburg Laws he was forced to quit his post.

That same year he was beaten up by Nazi Brown Shirts outside his house. Desperate, he petitioned Hitler, asking that an exception be made for both him and his daughter under the new race laws.In his letter, he wrote: ‘For us it is a kind of spiritual death to now be branded as Jews and exposed to general contempt.’

Hitler obviously had a change of heart because clemency was revoked in June 1941, and ended up a slave labourer, building barracks. His sister was not so lucky and was gassed at Auschwitz.

Hess died in 1983 after a successful post-War career in West Germany, where he became president of the Federal German Railways Authority.

If he had been a worse officer he may have been more profligate with the lives of his troops…who knows, maybe even a certain Austrian Corporal would have been among those lost and the world would have been spared so much suffering.