Posted on January 7, 2013 by historywithatwist

Recent World War One footage released by British Pathe shows the disturbing effects of shell shock on a soldier’s system. Uncontrollable shaking, terrifying nightmares and lying on the floor convulsing were just some of the ways that traumatised soldiers reacted.

By 1918, there were over 80,000 British servicemen suffering from the condition. They were the hidden walking wounded, men whose suffering lead to heartache for families who had been praying for their safe return from the front.

It was initially thought the trauma was due to the actual exploding of shells in close proximity to soldiers – hence the term ‘shell shock’. However, it soon became clear that this was a false assumption when other men, serving far from the front line, presented with the symptoms, which were wide ranging.

The condition was also referred to as ‘war neurosis’, ‘combat stress’ and Post-Traumatic Stress Disorder.

Hysteria, anxiety, paralysis, muscle contractions, even blindness and deafness were just some of its effects. Other signs were nightmares, insomnia, palpitations, depression and disorientation.

At the time, most shell shock victims were treated with little sympathy. Their symptoms were believed to be a sign of weakness. As a result, in several medi 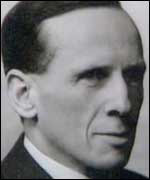 cal establishments, many victims endured further trauma by being given treatments such as solitary confinement or electric shock therapy.

But at one military hospital – Newton Abbott’s Seale Hayne in Devon – the approach was very different due to the revolutionary approach of Dr Arthur Hurst (left), an army major, who believed he could cure every shell shock victim.

Hurst used treatments such as hypnosis, persuasion, massage and dietary treatments to cure his patients. His method meant that he was able to cure up to 90 percent of shell shocked soldiers in just one session.

In a disturbing video released by British Pathe, a semi-naked solider at Seale Hayne hospital can be seen falling to the floor in a fit after shaking and staggering around the stark, bare room.

But after treatment, the man is seen wearing his uniform marching confidently towards the camera.

Major Hurst encouraged his patients to shoot and also staged a reconstruction of the battlefields of Flanders on Dartmoor to help them relive their experiences.

Hurst’s pioneering work did much to ease the suffering of men who had already been through hell and back. His devotion to his patients and his innovative approach to their treatment makes him a true hero of the war years and afterwards.

Check out these films from British Pathe to see the full horror of shell shock.