Tirpitz: The P.O.W. Pig of World War One

Posted on September 24, 2013 by historywithatwist

Those Germans were real swine during the war, you know. Now, now, before  I get accused of Hun bashing, I will point out some things in my defence – for one, I’m married to a German lady, I also have four beautiful children, who are half German last time I checked, and, eh, thirdly – there really were pigs amongst those German ranks.

I refer, of course, to the story of Tirpitz, the celebrated P.O.W. pig of World War One. What do you mean you never heard of her? I have written of animals in war zones before (http://goo.gl/C0UNhm) but this was new to me.

The story came to me through a friend via Henry Nicholls (@WayOfThePanda), and it begins when the German warship SMS Dresden was cornered off the Chilean coast by HMS Glasgow and HMS Kent. The German ship had been tracked down following damage it sustained in 1914 during the Battle of the Falklands.

With nowhere to run and to avoid its capture the German captain scuttled his ship. Crew from HMS Glasgow spotted the prize sow swimming amongst the debris and winched her aboard, thus beginning a new episode in the porker’s life. 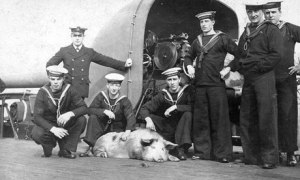 Tirpitz the pig on board HMS Glasgow

The men took a shine to the swine and decided to appoint it the ship’s mascot, promptly naming her after the head of the German navy Admiral Alfred von Tirpitz. They even went so far as to award her the Iron Cross for opting to stay with her ship to the bitter end.

Life as a P.O.W. pig was pretty good for Tirpitz. She lived in comfort on board before eventually disembarking at Portsmouth Harbour, where she joined some ducks, geese and chickens in a naval training post at Whale Island.

Perhaps Tirpitz didn’t realise that for her the war was over but whatever the reason she soon got into quite a bit of trouble when she decided to break into the chicken run and launch a daring raid for food.

The authorities took a dim view of this rebellious streak, loaded her into a van (with the help of ten men) and handed her back to Captain John Luce, former commander of HMS Glasgow and by then Commodore of the Royal Naval Air Service Training Establishment at Cranwell in Lincolnshire.

Tirpitz and his new custodian clearly didn’t get on. It wasn’t very long before he offloaded the sow at a Red Cross charity auction on December 11, 1917 for the not insubstantial sum of 400 guineas (about €25,000 now).

After that, Tirpits’z fate sailed into murky waters. It is thought  she may have been auctioned a couple of times before finally succumbing to the bacon slicer in 1919.

The 6th Duke of Portland, William Cavendish-Bentink (her 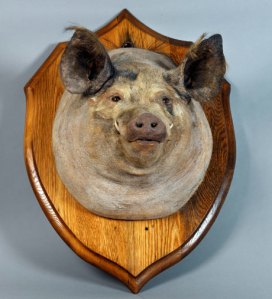 owner at the time) had Tirpitz’s head stuffed and mounted before donating it to the Imperial War Museum in London.

The good Duke also found use for a couple of Tirpitz’s trotters, turning them into the handles of a carving set, which was used on the next HMS Glasgow during World War Two . So, in her own very special way, Tirpitz, the sow that took part in two world wars, continued to serve (quite literally, actually) for years to come.

25 Responses to Tirpitz: The P.O.W. Pig of World War One