How ‘Pam’ and a Dead Tramp Helped win the War

Posted on May 6, 2014 by historywithatwist

Whoever came up with the line that dead men tell no tells needed their head examined. Dead men – and women – tell us quite a lot, actually, as we know when we look at the fields of pathology and archaeology. But let’s forget those areas for the moment, the dead man I’m interested in is a fellow by the name of Glyndwr Michael.

Michael was a semi-literate drifter – a part-time gardener and labourer – who had a rather sad time of it. He was born in Aberbargoed in Wales in 1909. By the age of 15 his father had committed suicide. When he was 31, his mother died. Ill educated and homeless, Michael moved to London where he died in 1943, apparently after eating stale bread which had been smeared with rat poison.

Life had been hard for Glyndwr Michael but it would be in death that he would achieve true greatness by playing the key role in one of the greatest hoaxes in military history.

At the time of Michael’s demise, Britain was struggling for survival in the war against Nazi Germany. For some time, a plan codenamed ‘Operation Mincemeat’ had been bubbling away at MI-5 – a deception developed to steer the German army away from Sicily, which was the planned point of attack for an Allied invasion of Italy. 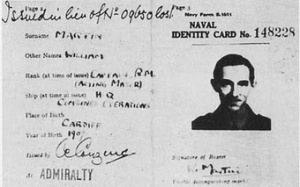 An identity was created – ‘Acting Major William Martin’ – with a whole collection of documents, including a receipt for an engagement ring, a letter from the Major’s father, a warning about his overdraft from his bank manager and even love letters and a photo of his fiancee, ‘Pam’.

When Michael died he became Major Martin. His body was dressed in a naval uniform and an attache case containing false invasion plans was handcuffed to his wrist.

The body of Glyndwr Michael being prepared for his mission

Michael/Martin went on his first and last voyage and was then dumped in the sea off the Spanish coast. As hoped, the current washed the body ashore. The hoax worked, and the Germans moved their forces from Sicily to Sardinia, leaving the way clear for the subsequent invasion.

The tramp Glyndwr Michael had fooled the German High Command, but he didn’t do it alone. Commander Ewen Montagu and a certain Nancy Jean Leslie also played their parts to perfection. 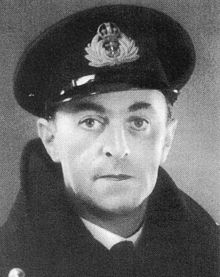 Montague was in charge of the operation. It was his job to ensure that Michael made a convincing corpse. Leslie was an 18-year-old clerk at MI-5. It was her photo that was slipped into Martin’s wallet along with ‘love letters’ she and Montagu wrote to each other, signed ‘William’ and ‘Pam’ .

“He was Willie and I was Pam,” Leslie recalled years later. “We went to clubs, films and dinner – always keeping tickets stubs etc.” She also inscribed a photo of herself in her swimsuit with a loving, “Till death us do part. Your loving Pam”.

It was only in 1996 after the true identity of ‘Major William Martin’ was discovered that Leslie (who became Jean Gerard Leigh after her marriage in 1946) came forward and identified herself as ‘Pam’.

The story was made into a movie, The Man Who Never Was, in 1956, but it is only relatively recently that the identities of the key players became known.

Jean Gerard Leigh passed away in 2012 at the age of 88. Her part in one of military history’s greatest hoaxes should be acknowledged, but by far the role played by a dead tramp from Wales in saving the lives of thousands of Allied invasion soldiers, should never be forgotten.