Adolf Hitler and the Battle of Little Bighorn

Posted on June 23, 2014 by historywithatwist 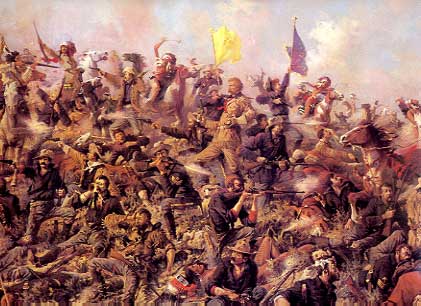 You may not think the words in the headline above belong in the same sentence, but history throws up some intriguing links sometimes. This one caught my eye a while back, but I think now is a fitting time to share it.

We’re fast approaching the 140th anniversary of, arguably, America’s most ignominious military defeat. It was on June 25, 1876, that a bunch of ‘savages’ under Chief Sitting Bull aninhilated the command of the charismatic, vainglorious Colonel George Armstrong Custer at the Battle of Little Bighorn.

‘Custer’s Last Stand’, as it became known in the media, was portrayed as a noble fight in which over 200 men lost their lives fighting a force of approximately 2,000 Indian warriors.

The iconic image of the day was of Custer, his golden locks flowing in the wind, standing shoulder to shoulder with his men as they tried to stem the advancing horde of blood-lusting Indians.

The fact that Custer’s hair had been shorn short by that stage didn’t bother the myth makers. But such is the continuing interest in the vainglorious army man that a lock of those famous tresses was put up for auction on June 9 with a guide price of $2,000.

The soldiers he led on that fateful day in June were portrayed as brave souls who stood their ground against overwhelming odds. As potent as that image was, it ignored evidence that the battle was a much messier affair.

Custer ignored advice and led his men into an enemy encampment far greater than he ever imagined. Many of his troopers were inexperienced and there were issues with their weapons, some of which didn’t fire correctly. The result was a rout. 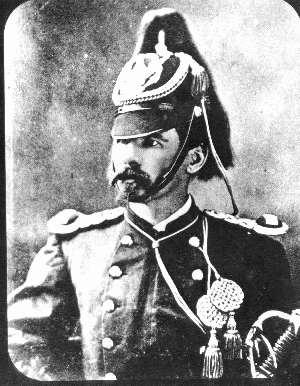 Captain Myles Keogh, the commander of I Company (one of five companies to be wiped out on that day), led one such ‘stand’ in which men actually fought shoulder to shoulder.

Keogh was a Carlow man who had served with distinction in the Papal wars, had been an officer of the Vatican Guard and had then gone on to fight with the Union side in the American Civil War, ending his service as a Lieutenant Colonel.

Keogh’s body was said to have been found at the centre of a group of troopers that included his two company sergeants, his trumpeter and his guidon bearer.

Like his comrades, he had been stripped of his clothing, but not mutilated, perhaps because of the religious medal he wore around his neck.

His bloodied gauntlet and the guidon of I Company were recovered by the army three months after Little Bighorn. 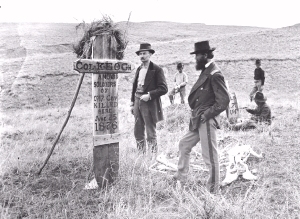 The spot where Captain Myles Keogh fell on the battlefield

Keogh’s horse, Commanche, fared a little better than his master and was later celebrated throughout America as being the only survivor found on the battlefield. (In actual fact, up to one hundred horses are believed to have survived, but most were taken as spoils of battle by the indians and the rest were so badly wounded they had to be destroyed).

He had been badly wounded – with four bullet wounds at the shoulder, one through his hoof and one on each hind leg. Nevertheless, he was nursed back to health and went on to live out his final years at Fort Riley, Kansas.

But what has any of this got to do with that little Austrian Corporal Adolf Hitler, I hear you ask. Well, it so happens that Myles Keogh’s grandnephew was one Michael Keogh, a man with just as interesting a military pedigree as his late relation.

He rose to the rank of Field Lieutenant. In his regiment he met a certain Lance Corporal called Adolf Hitler. He actually saw Hitler on a stretcher when he was wounded at Ligny in 1916.

After the war, Keogh joined the Freikorps, an early fascist organisation sworn to smash Communism. He was duty officer at a Munich barracks when he was called to quell a riot that had erupted in a gym. 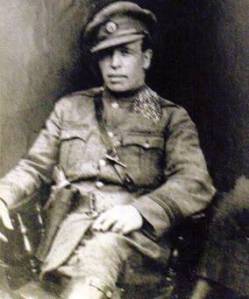 When he got there a crowd of some 200 soldiers were busy beating two men to a pulp.  Some of the attackers held bayonets and it seemed to Keogh that the two victims were about to die.

He ordered his men to fire a volley over the heads of the mob. The crowd dispersed and Keogh managed to drag the two victims out of the gym “cut, bleeding and in need of the doctor”.

Keogh recalled: “The fellow with the moustache gave his name as Adolf Hitler. It was the Lance Corporal of Ligny. I would not have recognised him. He was thin and emaciated from his wounds.”

After the war he’d say: “If we’d been a few minutes later or Hitler had got a few more kicks to his old wounds or he’d been shot — what would have happened if we hadn’t intervened and he’d died?”

It’s a fascinating story that would torment Keogh for the rest of his life.

In his memoirs, Keogh also refers to a time when he was undergoing military training in America before World War I while doing service with the National Guard. He tells of how he was on a mounted infantry course at Ft. Riley and that he actually rode Commanche (who was then, according to Keogh, 34 years old).

It was the image of the young Michael Keogh riding the only mount left standing on the bloody field of the Little Bighorn that got me writing this post. The notion of the grandnephew (and Hitler’s saviour) riding his granduncle’s horse was fascinating.

Unfortunately, in my research for this article I encountered one small problem with Michael Keogh’s memoir (With Casement’s Irish Brigade)  – namely that Commanche died aged 29 years in either 1890 or 1891. Michael Keogh was born in 1891.

This incongruity is not to suggest that anything else in Michael’s memoir is suspect. I think what happened was quite prosaic… Michael may have told those at Ft Riley about his illustrious relative. Possibly, somebody there spun a yarn about Commanche being still alive and let Michael ride her for ‘old time’s sake’.

It’s a pity, because it would have tied two strands of history even closer together. Even without the Commanche connection, though, it’s a remarkable thing that two members of the same Carlow family could have been involved with such famous figures during such pivotal moments from history.

The Keoghs from Carlow certainly saw some sights, as did Commanche, who now stands stuffed in a glass case at the University of Kansas. Having survived rampaging indians in their lust for revenge, looking out on idling undergraduates engrossed in their Snapchat must seem a breeze…

25 Responses to Adolf Hitler and the Battle of Little Bighorn