Posted on September 14, 2014 by historywithatwist

On August 15, 1939, an English passenger plane from British Airways Ltd. crashed in Danish waters between the towns of Nykøbing Falster and Vordingborg. There were five casualties reported and one survivor. Just two weeks before, Hitler invaded Poland.

With the world at the brink of war, the manner in which this incident was investigated left much open to doubt. The jurisdiction battle between the two towns and the newly formed Danish secret police created an atmosphere of intrigue and distrust.

One of those who died was the maternal grandfather of author MCV Egan, who has used these events to create her novel, The Bridge of Deaths, a love story and mystery all rolled into one.

The novel is the culmination of 18 years of sifting through conventional and unconventional sources in Denmark, England, Mexico and the United States. Here, Maria Catalina Vergara Egan explains what she unearthed during her research.

I was recently approached via Facebook by a Danish gentleman. He was organizing old papers and found a negative of a photograph; it was a picture of a British Airways Ltd Lockheed Electra 10A, call letters G-AESY, after it was salvaged from the water in August of 1939.

The photograph was taken by his grandfather, an amateur photographer. I was so happy and surprised to learn that by simply Googling the call letters of the plane he found me with ease. 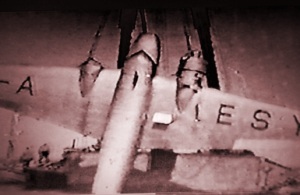 I won’t deny for a moment how hard I have worked on making my cyber footprint as large as can be, but the feeling was still fantastic. The feeling of fun and excitement took me back fourteen years to the turn of the millennium when by word of mouth, snail mail inquiries, and sheer luck I was able to connect with fascinating people who had information about or related in some way to the crash of the G-AESY.

Interviewing and researching Danes in regards to WWII is not as easy as one may think. In a country where philosophies were much divided in that era, the comment “some Danes won’t look good” was uttered more than once in discomfort even by those who were so kind to help me.

Amongst the many who were helpful, one gentleman in particular left a strong impression. Eric, although he was, frankly, too young to fight during WWII, still carried the guilt that he did not find the way or the courage to join the Danish resistance during that time. As a problem solver and not one to wallow in discomfort of the past, he found, in his later years, a way to somehow be a part of the Danish resistance: He chose to seek out and record Resistance members who may have otherwise been forgotten.

He spent decades interviewing and taping hundreds of Danes. Every story was personal and important to him. He had an uncanny recollection of each and every one.

The room housing his library of interviews was not very small at all, and covered wall-to-wall with tapes.

One of the men he interviewed, Viggo, had started his interview discussing the crash of the G-AESY, which I investigate in The Bridge of Deaths: “As I recall, to me WWII began in the summer of 1939 when an airplane crashed near my town and a British Member of Parliament was killed…”

Viggo had joined the resistance as a 17-year-old, and remained active throughout the war. The perceptions of a seventeen-year-old were hardly better information than anything I found in the various archives (especially the Danish ones), but that day gave me an understanding, a window into the Danish Resistance Movement, that to this day makes me ponder about the amazing importance of the unsung heroes, the invisible ones that risk it all with conviction and not conscription.

Although Denmark was occupied by the Germans on April 9, 1940, it was a country with a unique and strange standing during WWII, because it was never “officially” at war with the Germans.

This makes the Danish Resistance Movement all that more interesting and unique. Although it was not officially recognized by the allies, it was easy to see by the exhibits at the Museum of Danish Resistance that the Movement was certainly put to very good use. (Today, the Museum remains closed due to a serious fire, but in my visits in 2000 and 2002 I got to learn and benefit from all their amazing exhibits.)

Denmark was a divided country in its loyalties and beliefs during WWII. When I worked with the Danish files at the police station in Vordingborg, I had to understand that some of the men I was researching could well have been shipped off to German work camps and others may well have had to, at least superficially, affiliate themselves with their occupier.

As someone with the privilege and benefit to have always lived in places of peace, far be it for me to imagine how I would react, especially if fighting would endanger my child. The choices made under such duress surely cannot be judged under the same premise as those made under ordinary circumstances. As such I could not, and cannot, understand the ‘embarrassment’ conveyed by the Danish people who were so open and helpful.

I often wonder about other clandestine movements, much like the Danish Resistance, that may have not succeeded even with the best of intentions, and whose heroes we may well know as culprits.