Posted on October 3, 2014 by historywithatwist

I’m honoured to have Gillian Mawson as a guest blogger on historywithatwist. Gillian’s books are important works of social history that will be invaluable to anyone who wants to understand the impact of the World War II on the children of the time.

Gillian has been collecting evacuation stories since 2008 when she interviewed 200 evacuees for her first book, ‘Guernsey Evacuees; The Forgotten Evacuees of the Second World War’. Seventeen thousand people fled Guernsey to England in 1940, just before Germany occupied the Channel Islands.

Sadly, many of the people she interviewed have since died. Gillian runs a community group for evacuees in Manchester so they can share their stories with the community. She feels it is vital that the memories of evacuees are recorded and shared now before they are lost for ever.

On 1 September 1939, millions of British children were evacuated with their schools, but there were further waves of evacuation during the war years. The children were accompanied on their journeys by their teachers and sometimes by mothers, and Gillian’s book includes stories from these adults.

Some children stated that they went to school one morning and were evacuated within a few hours, without having had the chance to say ‘goodbye’ to their parents. When their children did not return home at the usual time, mothers gathered at the school where they found short, stark notices pinned to the school gates. Over the next few days they would receive a postcard such as this, showing their new address. 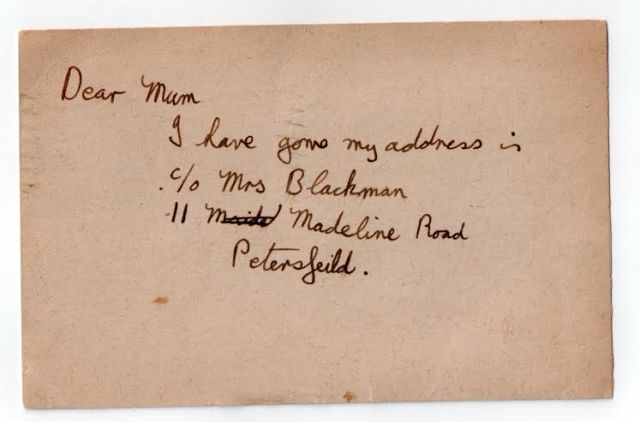 One child’s message home – ‘I Have Gone’. (Courtesy of the Emmanuel School at War archive)

However, these postcards had tragic consequences for one little boy. The young evacuee posted a card home from his new billet, then went for a walk, but in the unfamiliar surroundings, he somehow fell into the canal, where he drowned. His family were advised of his death that evening, but the next morning his postcard arrived with its cheerful inscription, ‘Dear Mum & Dad, I am very happy here, don’t worry about me.’

Gerry Mullan was six years old when he was evacuated from Belfast to County Tyrone in 1941.

‘We went to Fintona, where we had lived three or four years earlier. I felt excited and apprehensive, because I wasn’t sure what it was going to be like to live in someone else’s house. My brother Joe and I
were looked after by a woman called Mrs Martin, an old friend of my mother. She was good, but very strict. Mother came with us, but she and my younger brothers were housed four or five miles away.

We saw her once a week but it was a bit heart-rending. I renewed acquaintances with some of the children I had known years earlier, which was good, but although Mrs Martin was very kind I remember never being really sure whether I was happy or not. We
were very hard-up in Tyrone, I remember the jotter I used at school had to be used in every margin, covers, everywhere I could get a scribble I filled it. 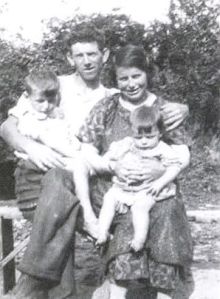 Gerry Mullan on the right, as a baby

My uncle came to see us once or twice a week and gave us money for a new school book, but of course the money went on ice-cream! We only lasted four months and came back to Belfast in July. It was sad in the end to leave because I was seven by then and beginning to enjoy it, as I had made a lot of friends. But it was great to get home and see my father again and be with mother full time.’

William Crawford was 11 years old when he was evacuated from Belfast to Portrush in 1942.

‘I attended Cabin Hill School, Belfast, and one day I turned on the wireless to hear news of the declaration of war. I was horrified because my father was working in Ceylon so my parents might not be able to return until the end of Dad’s contract. I experienced two air raids at school and on one occasion our Headmaster, ‘Fluffy’ Sutton, read Sherlock Holmes stories to us in the shelters.

There was no latrine, so we were allowed out for a pee, although sometimes we used to pretend, and stay out just a bit too long to watch the bombs and the fires of Belfast. In 1942 our school moved to the safety of Portrush where we were accommodated in hotels and boarding houses. One morning in 1945, I was told to travel to my Uncle Hubert’s house in Belfast to meet my parents who I had not seen for over 7 years.

I entered the living room and saw two people, a man and a woman. The woman, my mother, asked, “Are you William?” I just nodded through teary eyes. Then Mother said to the man, “Matthew, are you going to say hello to William?” Matthew turned towards me and said “Are you my son?” My father and I shook hands. I didn’t want to let go.’ 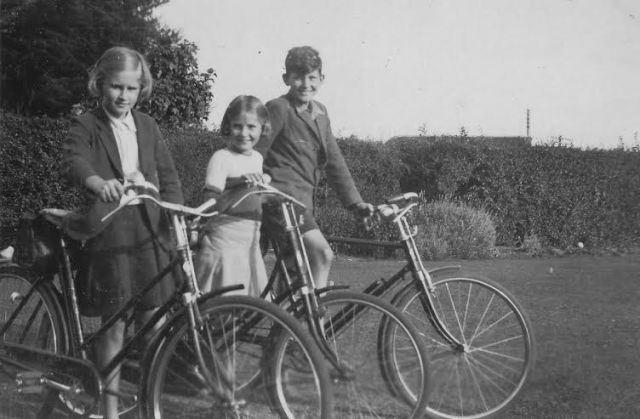 William Crawford (right) cycling with his sisters Jean (left) and Alison (centre) in 1941. A year later William was evacuated to Portrush.

Gillian’s book shows that many evacuees came to love their ‘foster parents’ and stayed in touch with them after the war. Some evacuees, however, were less well treated and a chapter of Gillian’s book is devoted to their memories.

Every evacuee’s story is different and this book, with its combination of 100 stories and family photographs, paints an intimate picture of the different ways in which the British people opened up their homes to evacuees. 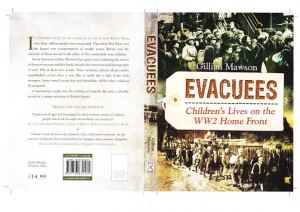 ‘Evacuees: Children’s Lives on the WW2 Home Front’ by Gillian Mawson is published by Pen & Sword.

23 Responses to The child evacuees of World War II