Posted on April 14, 2015 by historywithatwist

AS a boy, I remember looking longingly through the window of Turner’s shop on Aughrim Street and wishing I had more in my pocket than the 50p that nestled there. Turner’s was our special shop, the place we went to for treats. It sold comics like Warlord and Victor, as well as Commando story books. I loved those little books.

The other thing about Turner’s that I liked were the cowboys and indians that danced and pranced on their horses in its window. The cowboys had their six-shooters and the indians wielded tomahawks and hallooed blood-curdling war cries… at least they did in my imagination.

These days the indians are called Native Americans. Whatever their name, my childhood fascination with them evolved over the years to encompass reading quite a few books about them and, a few years ago, writing my own book (yet to be published) about the Choctaw and their huge generosity to the Irish people during the Famine.

The Choctaw were one of the ‘civilised tribes’. They took on ‘white ways’ and proved to be very astute and successful in business. That’s not quite the image of the ‘indian’ that’s perpetuated in popular culture, however, where we like our ‘indians’ filled with blood lust and nobility.

But whichever way we paint Native Americans of the Old West – ‘civilised’ or ‘savage’ – one thing remains the same, the image is always of men. Any women are secondary, extras to the drama being played out in the foreground, despite the fact that tribes operated within a matriarchy. And that omission played out in popular culture, too. To put it plainly, I don’t ever recall seeing ‘squaws’ nestling in the window of Turner’s on Aughrim Street.

It’s a pity toy makers were so narrow-minded in their view because had they been a bit more aware they could have cornered the market and sold toy figures by the truckload – not of Geronimo or Crazy Horse or Sitting Bull, but of a hard-faced warrior by the name of Lozen, a woman who fought shoulder-to-shoulder with the braves and who was a leader amongst her people, the Chiricahua Apache.

Here’s how one of her compatriots, James Kaywaykla, remembered her to Eve Ball in an interview for her book In The Days of Victorio: Recollections of a Warm Springs Apache:

“I saw a magnificent woman on a beautiful horse—Lozen, sister of Victorio. Lozen the woman warrior! High above her head she held her rifle. There was a glitter as her right foot lifted and struck the shoulder of her horse. He reared, then plunged into the torrent. She turned his head upstream, and he began swimming.”

In 1877, Kaywaykla was a child riding behind his grandmother as they fled US soldiers: According to him, the other women and the children followed her into the Rio Grande. When they reached the far bank, Lozen came to Kaywaykla’s grandmother. “You take charge, now”, she said. “I must return to the warriors”, who stood between their women and children and the approaching cavalry.

According to Kaywaykla, she “could ride, shoot, and fight like a man, and I think she had more ability in planning military strategy than did Victorio”.

She never married, and is said to have given as good as she got when it came to proving her strength and athleticism amongst the braves. She dressed and fought just like the male warriors. 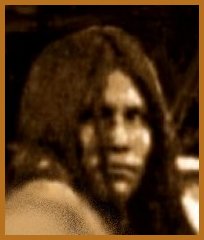 And Lozen, who was born in the 1840s, had other talents, too. She was a shamen, able to use her powers to learn the movements of the enemy. Victorio said, “Lozen is my right hand … strong as a man, braver than most, and cunning in strategy. Lozen is a shield to her people”.

Victorio and his band of Apaches had fled the San Carlos Reservation in Arizona and sown terror amongst settlers as they rampaged across New Mexico’s Black Mountain. Lozen was fighting by her brother’s side through it all, rustling horses and joining raiding parties.

The band was ambushed by Mexican troops and defeated in 1880. Victorio was killed, but Lozen wasn’t there to witness his death. She was miles away escorting a pregnant woman to safety.

Her absence saved her, and allowed her fight another day… this time alongside the survivors of her band, led by Nana in 1881, in what became a two-month long campaign of bloody retribution.

But she wasn’t finished there. After being apprehended and returned to San Carlos she later broke out again, this time with Geronimo. He valued her, too, and is reported to have said of her: ‘there is no warrior more worthy than the sister of Victorio’. No small compliment coming from one of the greatest guerrilla fighters of all time.

Lozen used her powers to locate the American and Mexican cavalry who were pursuing Geronimo’s band. Outstretching her arms, she would chant and move in a circle, whereupon she would feel a tremor in her hands. Whatever direction those hands were pointing at the time would indicate where the enemy was. The level of tremor told her the strength of the pursuing party.

The pursuit was relentless and, inevitably, the renegade Apache were rounded up. Lozen would remain a prisoner at Mount Vernon in Mobile, Alabama, until her death of tuberculosis around 1887.

Her story is in many ways the story of all Native Americans of the time – that of a free spirit caged. Yet her fighting prowess and charisma proved an inspiration and insured that, in certain quarters, her reputation survived longer than that of her tormentors.

Next time you watch a movie about ‘cowboys and indians’ in manly combat think of Lozen – the warrior woman who knocked the notion of ‘the weaker sex’ firmly on the head, and most likely scalped it, too.

21 Responses to Lozen, the Warrior Woman