Posted on April 29, 2015 by historywithatwist

Friedrich Engels’s name will forever be associated with that of Karl Marx. Together, they would write The Communist Manifesto, and in doing so would change the world.

There’s a saying that behind every good man is a great woman — well, Friedrich Engels had two… sisters by the name of Mary and Lizzie Burns. The interesting thing about them is that they hail from the Irish slums in Manchester. Engels was wealthy — the son of a mill owner — and yet he seemed to be in touch with the needs of the working class.

How was that possible? Well, that’s where the sisters come in. I know little about Engels or the birth of Communism, but I know a man who does. Gavin McCrea’s debut novel, Mrs Engels, focuses on a fascinating partnership that helped bring Communism to the wider world — not the partnership of Engels and Marx, but that more private one of Engels and his working class Irish lovers, the sisters Mary and Lizzie Burns.

There is little recorded about the sisters, so Gavin had to bring them to life, and in doing so he gave Lizzie, in particular, a strong and vibrant voice. Here, Gavin highlights the importance of the two women in the political and psychological development of Engels. Over to you Gavin…

In 1842, at the age of twenty-two, Friedrich Engels was sent to Manchester to do a two-year internship at his father’s cotton mill. It was hoped that this training would prepare the young Engels for a career in the cotton industry. Instead, Engels’s experience in Manchester, his exposure to its mass poverty specifically, was to awaken his class consciousness and lay the foundations of his future communist philosophy.

Back in his native Barmen in 1844, Engels wrote his exposé Condition of the Working Class in England. He did so with a bourgeois German audience in mind. His aim was to lay bare to the literate, property-owning and industrialist class of his homeland — the class he himself was born into — the privation and degradation suffered by the workers as a direct consequence of the capitalist system. He wanted to show the bourgeoisie that capitalism was, in fact, theirs.

It was they, and they alone, who benefited from it; they were responsible for its form and ensured its continuance; and it was they, now, who must be made to see its effects.

‘Let us hear,’ Engels implored repeatedly in Condition. ‘Let us hear, let us hear,’ over and over again. It was thus, by the force of his rhetoric, that he accused the bourgeoisie of turning a deaf ear to the cries and protestations of the people who suffered under capitalism. The bourgeoisie, he was implying, were choosing to ignore the grievances of those who, to their own disadvantage, sustained capitalism and its corrupt order of privileges.

Yet only rarely — on a couple of occasions in more than two hundred pages — did he actually ‘let us hear’ the voices of the suffering workers themselves. Instead, he devoted the vast majority of his text to the comments and opinions of middle-class observers.

He did this for a reason. He believed that the bourgeoisie would listen only to voices familiar to their own, voices that they already recognised as worthy of their attention. Faltering or inarticulate voices, on the other hand, would repel them, bore them, alienate them. Thomas Carlyle on the discontent among the cotton spinners, yes. An illiterate worker on the maiming he received on the factory floor, no. J. C. Symons on the squalor of lodging houses for the Irish immigrants, perhaps. A poor Irish woman on the loss of her child to disease, definitely not.

‘Let us hear,’ Engels wrote again and again, by which he meant, ‘Let us hear ourselves until we actually do.’

But — and this is what makes Condition so unsettling to read today — Engels wasn’t always clear about who ‘we’ were. He painted an uncertain picture about which class he belonged to. For while he undoubtedly directed his attack at the class he was raised in, the class with both the education to read and the political and economic power to respond, he was also at pains to align himself—if not by birth then certainly politically, philosophically and emotionally — with the working class he observed in Manchester, the class which had no access to his words.

Which is to say, while he catered to an implied bourgeois audience by keeping the workers themselves silent, he also dedicated the book to the workers themselves, addressed them throughout as if they were his compatriots, and claimed to be fighting with them against a common enemy. Indeed he often spoke as if his middle-class public wasn’t even there:

[Having] ample opportunity to watch the middle-classes, your opponents, I soon came to the conclusion that you are right, perfectly right in expecting no support whatever from them. Their interest is diametrically opposed to yours, though they always will try to maintain the contrary and to make you believe in their most hearty sympathy with your fates.

So why should the middle classes have listened to Engels’s appeals? What made him so special that he could demand their attention while at the same time keeping a distance from them? If, as his book suggested, the working class and bourgeoisie were unreconcilable enemies, then what gave him the capacity — or indeed the right — to position himself between these two camps and to profess to see the circumstances of each with equal perspicuity?

The answer lay in his private life — where else? During his internship in Manchester, Engels had a relationship with an Irish working woman called Mary Burns. It was Mary who escorted him on excursions through districts which would otherwise have been unsafe for a stranger to enter. She was Engels’s source of information about the factory and domestic conditions endured by the working people of the city.

She helped to provide him with the material for his communist theory. In 1850, when Engels returned to Manchester to take up full-time employment at the mill, again he took up with Mary, and they remained lovers until her death in 1863. At that point — or perhaps even before — he started a relationship with Mary’s sister, Lizzie.

He and Lizzie were lovers until Lizzie’s death in 1878. It was through these remarkable sisters that Engels became acquainted with the ‘undiscovered’ working people of Manchester, its struggles, its sorrows and its joys. It was Mary and Lizzie who gave him the confidence to shed his purely bourgeois identity and feel kinship with a class that, according to his own scheme, was naturally hostile to his ilk. 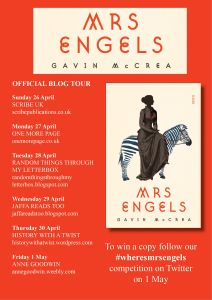 To the lives of Mary and Lizzie, we have no guide. Because they were illiterate and left no diaries or letters of their own, they remain ghosts in the historical record. They are the silent voices in Engels’s Condition. They are the spokeswomen who call out to be heard. But how can we hear those who are barely there? Our fantasies alone must satisfy us. Our imaginations must do the work of transforming these slight historical figures into the massive fictional characters that they deserve to be.