The Cult of the World War II Soldier

Posted on July 3, 2016 by historywithatwist

The American flag stands for different things to different people – some see it as the symbol of freedom, others see Old Glory in less benign terms as a banner of repression and global control. This 4th of July, though, Americans – and others – the world over will toast it and celebrate their nationhood with parties and parades festooned in red, white and blue.

The land of the free and the home of the brave – the Emerald City, where wealth, health and happiness are possible in a country forged by an unquenchable pioneering spirit – isn’t that what the founding fathers fought for? That ideal is held up as a benchmark for US citizens and politicians, however much history and cold hard facts might challenge it.

The American Dream may be less of a reality these days, but that doesn’t mean people don’t aspire to it and hope that the wealth it promises will some day come to them. And what’s wrong with that?

Hope – faith –  is what keeps us all going. We hope, we believe that our day will come, whether that be in the form of a lottery ticket, or in accepting that a higher power is guiding us and will reward us for our faithfulness.

Which, in part, explains why a religious cult in the South Pacific surrounding a World War II US soldier still flourishes to this day.

Americans have the 4th of July, but for the natives of Tanna – which forms part of the small Pacific island nation of Vanuatu, 1750km east of Australia – February 15 is the day to raise Old Glory and pray that the man who brought them great wealth will one day return.

Each year, the islanders dress up – the women in long, flowing multi-coloured grass skirts, while the elders wear old GI uniforms bedecked with medals. The men of the island parade in trousers with the letters USA painted on their bare chests, and carry sharpened red-tipped bamboo poles to resemble bayoneted rifles.

Songs are sung, flags are raised and music comes courtesy of a string band, all to pay homage to the god-like spirit of the almighty John Frum, who they hope will one day return, bringing wealth and gifts from the far-flung land of America.

During World War II, the island of Tanna (population 29,000) was inundated with 300,000 American serviceman preparing to fight  Japan following the murderous attack on Pearl Harbour.

To accommodate the soldiers, airstrips were built, hospitals erected and all manner of equipment landed. For the islanders it became a time of great prosperity as food and supplies were plentiful.

Naturally, the soldiers made a big impression. They would tell the islanders, ‘I’m John, from Mississippi,’; ‘I’m John, from Philadelphia…’ These ‘John Frums’ were the bringers of magical gifts, things Tanna’s residents had never seen before – Coca Cola, radios, watches, ice boxes – the list of wondrous objects seemed limitless.

But when the war ended, John Frum packed up and moved back home, taking all that magic and prosperity with him. Ever since, the people of Tanna have done all in their power to entice him back. 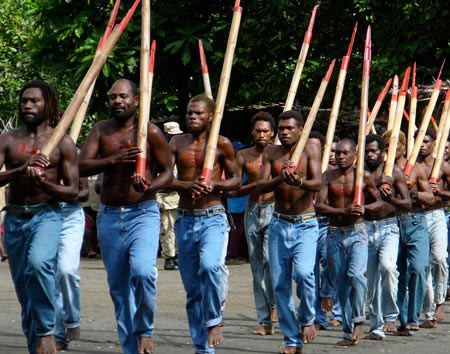 Rickety ‘observation towers’ were erected, fields were ploughed to resemble airstrips, replica airplanes were built, discarded uniforms were recovered and worn, Star Spangled Banners were raised, songs chanted and prayers were said, all in a bid to lure John Frum back.

And this has been going on since the 1940s. Smithsonian Magazine sent a reporter to the island in 2006, to learn more about the John Frum Movement, which has thousands of followers. Elders told him that they worshipped in the hope that John, who was ‘more powerful than Jesus’, would return with more cargo.

However, John Frum is not the only ‘cargo cult’. The islanders also revere ‘Tom Navy’ and even the Duke of Edinburgh. ‘The Prince Philip Movement’ stems from the Fifties or Sixties when islanders saw how much respect was given to the Queen, they came to the conclusion that her husband must be a very powerful man indeed.

To my American friends, I wish you all a happy 4th of July, and ask that the next time you watch Old Glory fluttering in the breeze, you think of the islanders of Tanna with their grass skirts, painted chests and sharpened bamboo poles. In their own way, they are just as patriotic when it comes to celebrating all that John Frum’s homeland has to offer.

17 Responses to The Cult of the World War II Soldier