Posted on April 30, 2018 by historywithatwist

Tony Bennett may have left his heart in San Francisco, but some remorseful thieves in Dublin decided to leave theirs in the care of the Irish police force last week.

The city’s Christ Church Cathedral welcomed back an old friend when the stolen heart of Dublin’s patron saint, Laurence O’Toole, was returned to its care having been taken from the church six years earlier.

Laurence – an ascetic who wore a hair-shirt, who never ate meat and who fasted every Friday – became Archbishop of Dublin in 1161. 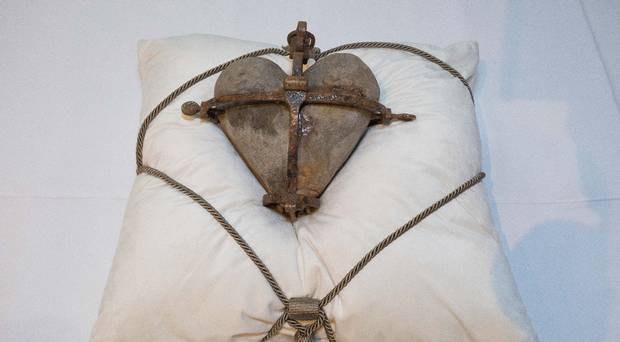 In 1180, after travelling to Normandy, he became ill and died. His heart was preserved, and after he was canonised in 1225, it was taken to Christ Church Cathedral.

According to Garda sources, the ancient organ had only brought bad luck to the family who had stolen it, and the thieves were only too glad to hand it back. The news was met with joy by Church authorities.

As stolen goods go, you might think a human heart is something of a rarity, but there have been plenty of famous body parts that have gone AWOL over the years… just take the case of Yelena Rzhevskaya.

During the final days of the Second World War, the 25-year-old Russian army interpreter was handed a satin-covered burgundy box, which contained a charred fragment of lower jaw and some dentures.

According to her commanding officer, these were the teeth of Adolf Hitler – or where they?

Many suspected the Fuhrer could have escaped from Berlin and might be hiding somewhere in the Bavarian Alps. Proving that he was dead, therefore, was crucial.

Yelena soon found herself travelling across bomb-scarred Berlin for proof that the teeth were indeed Hitler’s. She eventually found the answer in the ruins of the Reich Chancellery, where the dental office of Dr Hugo Blaschke was discovered.

Searching through a cabinet in Blaschke’s office, she found X-rays of Hitler’s teeth. They matched those in Yelena’s box.

But Stalin wanted the secret of Hitler’s death to himself. In terms of post-war negotiations, it suited him to suggest that Hitler might have survived the fall of Berlin.

So, it would not be until 2000 that the world would learn about Adolf’s gnashers, when the Russians put the teeth on display as part of an exhibition to celebrate the 55th anniversary of the end of the Second World War.

But Hitler wasn’t the only war leader to have part of their body taken. Napoleon is another, er, member of the club…  given that his penis did a disappearing act shortly after his death. Seemingly, the late Emperor’s little prince was cut off during his autopsy, before finding its way into the possession of Abbé Anges Vignali, who had given Napoleon the last rites.

After being displayed in New York’s Museum of French Art in 1927, the penis was bought at a Paris auction for $3,000 by an eminent American urologist, and now belongs to his son – New

Jersey man Evan Lattimer. ‘Napoleon’s item’, as the Lattimer family refer to it, may be a shrivelled husk of its former self, but it still makes a great conversation topic at a dinner party.

Another AWOL organ from a famous leader surfaced in 1966 when the American government returned part of the brain of Italian dictator Benito Mussolini to his widow, Rachele. Mussolini had been lynched by a mob in 1945, and the Americans had somehow got hold of the brain, either to study it or to have a ghoulish trophy.

In 2009, the dictator’s granddaughter Alessandro reported to police that vials alleged to hold the remaining some of Mussolini’s brains and blood were being offered on eBay for €15,000. The online store is said to have quickly removed the listing.

When it comes to well-travelled body parts though, few can rival St Francis Xavier. The 16th century saint spent his life spreading the gospel through Spain, France, Italy, Malaysia, Japan, Sri Lanka and India. He was about to extend his missionary to China when he died in 1552 and was buried on the beach at Shangchuan Island, in Guangdong province.

Several months later a group of Christians disinterred the body and were amazed to find it perfectly preserved. In March 1553, Francis was temporarily buried in St Paul’s Church, in Portuguese Malacca.

Francis’s corpse was put on public display, exposed for veneration – which, in hindsight, wasn’t a great idea because a Portuguese noblewoman is said to have taken the opportunity to bite off one of Francis’s big toes with the view to setting up her own lucrative relic chapel.

Poor, Francis – toe-less and with his hopes of eternal rest constantly being interrupted  – was then shipped to the Basilica of Bom Jesus in Goa, where his body was placed in a glass container encased in a silver casket in December 1637. Eventually, the toe was reunited with its foot, but a few other bits and pieces went missing along the way.

Francis’s right forearm was dispatched to Rome, while one of his hand’s ended up in Japan, and a bejeweled fingernail drew in the crowds in a Goan village. Another of his arm bones went on display in Macau.

Last year, one of the arms ‘toured’ Canada, where it apparently got a great reception.

Ah yes, relics on tour… no doubt the support act was The Grateful Dead.

12 Responses to The relic hunters