Posted on October 3, 2019 by historywithatwist

There’s a lot of ‘identifying’ going on these days. People ‘identify’ as being black, white, Native American… they identify as gay, straight, binary, non-binary. The whole world seems busy discarding identities or finding new ones; in fact, there’s one big identity crisis at the moment. And not only that, but there’s also then the minefield that is political correctness.

In fact, I probably trod on a few mines myself in the last couple of sentences. Is ‘Native American’ still an acceptable term? ‘Straight’ probably isn’t and ‘gay’ ditto. It’s confusing stuff, but it’s hardly new – you only have to look at the life of Herb Jeffries to see that.

To say that Herb was something of a trailblazer, who was way ahead of his time, is an understatement. 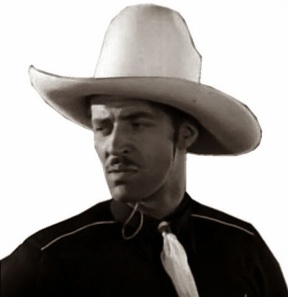 Herb gave voice to a whole swathe of society that was lost to American history and that to this day has been largely ignored… and he did it almost 90 years ago long before today’s ‘identifiers’ were even born.

So what was his claim to fame? Well, here’s where the ‘identifiers’ will sit up and take note… and the PC brigade will blanche with indignation.

Herb Jeffries was the world’s first black singing cowboy star. He became a household name – in black households at least – in films like Harlem on the Prairie, Two-Gun Man from Harlem and The Bronze Buckaroo, to name just a few of his movies.

You’ll find him on the Hollywood Walk of Fame and he was enrolled in the Black Filmmakers Hall of Fame in 1979 for his work in promoting black society and culture.

But here’s the thing about Herb, the black singing cowboy. For one thing, he wasn’t African; in fact, he was Irish – well, half Irish – and Sicilian with some French, Italian and Moorish roots thrown into the mix.

In fact, the closest Herb came to being a black man was when he put on the Max Factor makeup that darkened his skin. Yes, Herb Jeffries hero of Hollywood’s black filmmakers, donned ‘black face’. What would the PC brigade (and Canada’s prime minister Justin Trudeau) have to say about that!

But before people start taking up cudgels against him for daring to darken his skin to make a living, it is worth bearing a few things in mind.

Herb Jeffries described himself as being ‘three-eighths Negro’. He became a singer in black orchestras during segregation and, unlike some light-skinned black performers, never tried to ‘pass’ as being white.

Herb was born in 1913 and given the deliciously extravagant name of Umberto Alexander Valentino in Detroit to a white Irish mother, who ran a boarding house, and to a father, Domenico Balentino whose lineage was as equally exotic as his son’s name, with Sicilian, French, Italian and Moorish blood pulsing through his veins.

There was also a bit of Ethiopian in Herb’s bloodline, too, just to make things even more interesting and to give some credence to his African lineage. Mind you, that bit of DNA is said to come from his father’s great grandmother who went by the name of Carey.

The makers of Who Do You Think You Are? Would have a field day with Herb.

Playing the dashing good guy in the white hat and the ‘Clark Gable moustache’, he was ‘the Bronze Buckaroo’, the African American answer to white singing cowboys like Roy Rogers and Gene Autry, and his role was a far cry from the usual subservient characters played by black actors.

Herb just loved cowboy movies and he looked pretty cool in a Stetson. It was he who came up with the idea to make movie westerns with all-black casts.

“Little children of dark skin — not just Negroes, but Puerto Ricans, Mexicans, everybody of colour — had no heroes in the movies,” he told The Los Angeles Times in 1998. “I was so glad to give them something to identify with.” 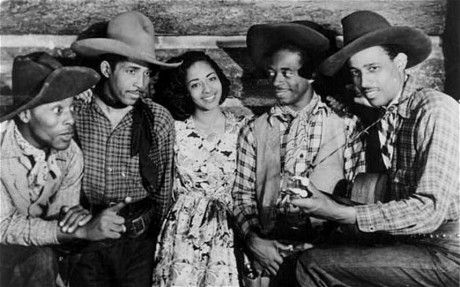 Herb Jeffries (second from left) in one of his westerns

When it came to making the first of those movies, the director felt he wasn’t black enough and so Herb darkened his skin to appeal more to his audience. He did this in the 1930s, but it wouldn’t be until the Seventies that black cowboys returned and made any sort of impact on the big screen. Sidney Poitier dipped his toe in the western genre in Buck and The Preacher, but it was probably Cleavon Little, starring in the comedy Blazing Saddles, which made people take notice.

Only a few black cowboy movies spring to my mind as having made any real impact at the box office – think Morgan Freeman in the anti-Western Unforgiven; Jamie Foxx in Tarantino’s Django Unchained, and, Denzel Washington in the remake of The Magnificent Seven. But there have been several dozen others down the years… yes, several dozen, as opposed to the thousands of cowboy movies with white actors.

In the real world though, black cowboys were far more prevalent than the silver screen would have you believe. It is estimated that 25% of cowboys were black in the Old West. Many of them had worked on plantations in the south and had become adept at managing animals. With the huge number of fatalities from the Civil War, their skills were in demand for cattle drives north.

And those drives were equal-opportunity affairs. Cowboys had to be quick to react to stampeding cows, to herding the stock and to the dangers posed by marauding Indians. In the dust-filled, high-octane whirl of a cattle drive, the colour of a man’s skin didn’t matter, it was how he did his job that counted.

So, those long drives fostered friendships among the cowboys, and there was equality, too… right up until their arrival in town, when the whole notion of equality went back out the window.

In town, a black cowboy was once again reminded of his colour – there were certain bars and restaurants he couldn’t frequent, and those easy familiarities he had enjoyed with his cowboy friends were left out on the range.

Ben Pickett, from Texas, was one of the best-known black cowboys. Born to former slaves in 1870, he would go on to become a star of the rodeo circuit. After years working as a ranch hand, he became a highly skilled cowboy, developing a unique method of catching and subduing stray cows. Pickett would control the animal by biting down on the cow’s lip, something he had seen dogs doing in the past.

He would later join the Miller Brothers 101 Wild Ranch Show and perform the trick as part of a routine for audiences around the world. Other black rodeo performers weren’t so successful. Rodeo competitions would be rigged to ensure black cowboys didn’t win, or they could only display their skills when most of the crowd had departed.

Due to racial prejudice, the whole notion of the black West has been airbrushed from history. The only dark skin tones are those of the Indian and the only black you’ll see is the colour of the hat worn by the bad (white) guy.

However, there is a gradual move to reclaim the black cowboy’s place in the history of the West. Movies and TV series are currently in production about the life of Bass Reeves, a black deputy US Marshall who was one of the most successful law enforcement officers of any colour.

Reeves is said to have arrested more than 3,000 criminals and shot dead 14 people in self-defence. Born into slavery in Arkansas, in 1838, he was taken by his owner to join the Confederate Army during the American Civil War.  Reeves later fled to Indian Territory, where he lived as a fugitive among the tribes until slavery was abolished in 1865.

He then moved to Arkansas where he, married and farmed for 10 years before being appointed a deputy, working for ‘Hanging Judge’ Isaac Parker, and responsible for Western Arkansas and Indian Territory. He did the job for 32 years, having close brushes with death as he tracked and brought in very dangerous criminals.

Reeves is even said to have had his hat shot off his head and his belt shot off on separate occasions during his run-ins with outlaws. He died in 1910 and his adventurous life is now the subject of a movie based on Fred Staff’s stirring tales of the black deputy Marshall, and actor Morgan Freeman is producing a series based on Reeves’ life.

And then there’s Montero Lamar Hil, or to give him his more familiar moniker to a certain demographic, Lil Nas X … the latest black singing cowboy, of sorts.

Nas X is a 20-year-old rapper whose hit Old Town Road was on the US Billboard Hot 100 for 19 weeks. To say Nas X is hot is an understatement. As of September 2019 his song had been streamed more than two BILLION times and the video on YouTube had 350 million views.

Old Town Road references the Old West and Nas X seems to just love those cowboy costumes… which brings us right back to Herb Jeffries.  Maybe the black cowboy is once again having his day in the sun.