Tan Blurb: It’s 1914 and Liam Mannion is forced into exile for a crime he didn’t commit. He flees Balbriggan, the only home he has ever known and travels to England, where he enlists and endures the torment of trench warfare in France. Five years later he’s back in England, a changed man, living in the shadow of his battlefield memories. Liam finds work in a Manchester cotton mill but prejudice and illness soon see him destitute. Starving and desperate, he enlists in a new military force heading to Ireland – the Black and Tans – and is posted to the very town he fled as a youth.

While he has been away Liam’s childhood friends have joined the republican cause, while his brother has allied himself to the Crown forces. Liam must wrestle with his own conflicted feelings about duty to the ruthless Tans and loyalty to his friends. The potent combination of ambition, patriotism and betrayal collide, forcing him to act as he comes face to face with the man who spread lies about him all those years before.

The Golden Grave Blurb: 1920 – Former British soldier turned republican fighter Liam Mannion is on the run with a price on his head. He looks up with old comrade Ernie Wood, who is being lured back to the battlefields on the Western Front in search of lost gold. The source of the story is Liam’s former lover, Sabine Durer, who ran a soldiers’ bar close to the frontline. Blinded by thoughts of her and buried treasure, Ernie and Liam enlist three other ex-soldiers to find it. What starts out as a simple excavation soon becomes much more. Wartime memories and old rivalries are resurrected. The men discover that Sabine has not told them the whole story and that their lives are in danger, but who can you rely on when greed and lust cloud your judgment beneath Flanders’ fields?

Extract from The Golden Grave

Reviews of The Golden Grave 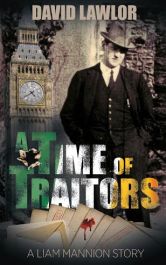 A Time of Traitors Blurb: It’s 1921, and LIAM MANNION is embroiled in the murky world of informers and spies; the IRA has announced a truce, and the British and Irish leaderships are taking their first tentative steps toward signing a treaty.

Liam and his fiancee, KATE, are tasked with finding republican rotten apples, some of whom are intent on foiling the fledgling peace talks. For Kate, the Brigade Intelligence Officer, that means asking awkward questions of trusted allies – questions that reveal a traitor. For Liam, it means travelling to London and collaborating with the British police to find a killer.

As the search unfolds, a devastating revelation from Liam’s past will make the hunt more personal–and deadly–than even he could imagine.

Extract from A Time of Traitors

Reviews of A Time of Traitors

Patriots’ Blood Blurb: It’s 1922 and Liam Mannion is in despair as Ireland tears itself apart in a bloody civil war.
Friends and families split over the terms of the treaty that ended the battle with the British. Unwilling to fight old comrades, Liam refuses to take sides.
His fiancée Kate has thrown herself into the new conflict. She can’t accept Liam’s decision to remain neutral and their relationship falters.
Meanwhile, The Watchman – an assassin whose mission Liam previously foiled – is back in Ireland on a murder spree, targeting the couple’s closest friends and allies, including the new state’s Commander-in-Chief, Michael Collins.
Liam is soon drawn further into the war as he finds himself in a desperate race to protect those he loves from a psychopath intent on killing them all.

High Crimes Blurb: In Dublin, Ireland, deadly consequences and a rush for vengeance — for one stalker, five victims, and an ex-priest whose sins are catching up with him fast.

Fifteen storeys in the air, crane operator Tommy Reynolds is up to more than shifting concrete and steel on a building site. He has his eagle eye on the apartments opposite. Tommy doesn’t just watch his victims; he films and he follows, and he listens, too. Soon he’s worming his way into their lives… but his victims, busy with their own troubles, don’t realise what he’s doing.

Maggie Preston’s trouble comes with the reappearance of Cathal Mac Liam, the serial sex abuser who destroyed her childhood and blighted her life. The ex-priest’s actions soon cause heartache for Tommy’s other victims, too… but they’re not going to take it anymore.

Read High Crimes, the tale of two ruthless predators whose victims fight back — and you’ll always wonder: Who’s watching who, and what would you do?

6 Responses to Extracts and Reviews